On December 7, Shandong Heavy Industry Group, which had just been established for half a year, held a "2010 Business Conference" and product demonstration in Jinan. A group of new products representing the highest level of domestic power systems, machinery, and commercial vehicles were unveiled at the show. The exhibition on that day was a concentrated display of products of key enterprises within the Shandong Heavy Industry Group. Exhibitors In addition to Shandong Weichai Power's Weichai Power, Shantui Stock, and SAIC Group, the subsidiaries of Hunan Torch, Fast Gear, Hande Axle, and Zhongyou Machinery also participated in todayâ€™s show. . 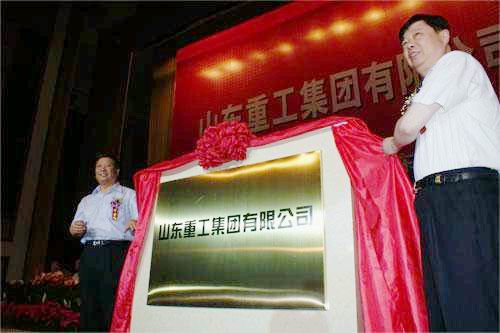 From power systems to construction machinery, commercial vehicles and auto parts, the display products cover the complete industrial chain of heavy-duty power equipment. According to the organizers, the products displayed at the exhibition not only belonged to independent intellectual property products, but also represented the highest level of "Made in China" in related fields. It was also the latest achievement in product structure adjustment after the establishment of Shandong Heavy Industries.

In addition, more than 200 technical cooperation companies and product suppliers from dozens of countries in Europe, America and Africa, including Bosch in Germany and AVL in Austria, have also brought strong international features to the exhibition. The French Baudolean company is a new engine company that Shandong Heavy Industry Group has acquired this year.

Under the guidance of the Shandong provincial government, Shandong Heavy Industry has a clear plan and goal since its establishment. â€œIn three to five years, sales revenue has exceeded 100 billion yuan to enter the world's top 500.â€ Around this center, Shandong Heavy Industry Group will use the engine as the core to build the competitiveness of the powertrain system in diversified markets such as vehicles, ships, and power generation equipment; the vehicle system with commercial vehicles as the core; the bulldozer with Shantui shares, and excavation Machines and other engineering machinery products are the core, achieving diversified leap-forward development, building leading enterprises in the global construction machinery industry; fully integrating auto parts business, forming auto parts platforms with rational product layout and high system integration in the group, and strive to create One of the largest parts and components companies in China. Six months later, Shandong Heavy Industry has achieved rapid development.

Shandong Heavy Industry Group owns many famous brands in China's first and industry such as Weichai high-speed high-power engine, Shantui bulldozer, Fast heavy-duty gearbox, Hande heavy-duty axle, Torch spark plug. What is even more rare is that this is not a simple accumulation of brands but an organic combination of common industry foundations and the same value chain.

According to another understanding, in the next step, Shandong Heavy Industry Group will start from the international network and realize the cooperation of Weichai Power, Shantui, Shaanxi Automobile, and Fast, and achieve integration. In November, the State-owned Commercial Vehicle Powertrain Assembly Engineering Technology Research Center, with a total investment of 1.5 billion, was approved by the Ministry of Science and Technology to settle in Weichai Power under the Shandong Heavy Industry Group. This is the only power engineering engineering center in China.

Jiang Kui, general manager of Shandong Heavy Industry Group, explained that due to changes in business content and management and control methods, the Group is proceeding with the establishment of organizational structure and business processes, researching and implementing the organic integration of the Group's industrial plate resources, including unified procurement and sharing a communication protocol platform. Collaboration between the various products within. "The international market can contribute 25-30% of the revenue, which is an important profit growth point for the Group in the future." Tan Xuguang said.

At the beginning of 2009, the planning for the revitalization of China's automobile industry was announced. The plan clearly stated that it supports and promotes the optimization of industrial structure through the merger and reorganization of domestic complete vehicles and parts and components companies, and promotes and enhances the continued development of the level of China's auto industry. Subsequently, a series of industrial policies have been introduced. . The Shandong Provincial Government promptly understood the development trend of the industry and actively promoted and guided the restructuring of the parts and components industry in the province. The birth and growth of Shandong Heavy Industry Group is a sign of the initial success of China's automotive and parts industry revitalization program.