Skip to content
[ Instrument Network Instrument R & D ] On February 10, the journal Proceedings of the National Academy of Sciences (PNAS) published online a research collaboration between Rao Zihe and the research team of the Institute of Biophysics, Chinese Academy of Sciences, and the team of Junjie Hu and the research team of the American Academy of Sciences Paper "Structural analysis of a trimeric assembly of the mitochondrial dynamin-like GTPase Mgm1". This study analyzes the crystal structure of the mitochondrial inner membrane fusion protein Mgm1 in the state of GDP, and proposes a molecular mechanism model of membrane bending required for Mgm1 to induce fusion through multimodal polymerization and multisite membrane binding. 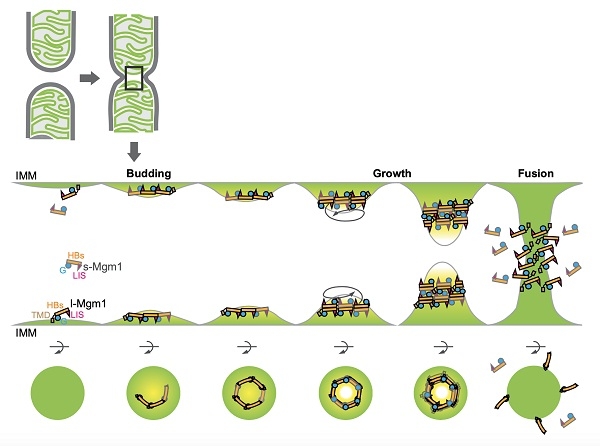 Mitochondria (mitochondrion) is an organelle that is covered by two layers of membranes in most cells. It is a structure that produces energy in cells. It is the main place for cells to perform aerobic respiration. Its diameter is around 0.5 to 1.0 microns.
Except for amoeba, Giardia lamblia, and several microsporidia, most eukaryotic cells have more or less mitochondria, but they each have mitochondria in terms of size, number, and appearance. They are all different.
Mitochondria have their own genetic material and genetic system, but their genome size is limited and they are a semi-autonomous organelle. In addition to energizing cells, mitochondria also participate in processes such as cell differentiation, cell information transmission, and apoptosis, and possess the ability to regulate cell growth and cell cycle.
Rao Zihe and Hu Junjie's team worked together to clarify the mechanism of mitochondrial outer membrane fusion protein Mitofusin (MFN) to mediate membrane tethering and fusion. However, the fusion of the inner membrane of the mitochondria is more complicated. Although the reaction also depends on the Mgm1 or OPA1 proteins of the motor protein superfamily, these proteins are derived from proteolytic hydrolysis and prolonged and soluble long-term transmembrane regions. Short, both are indispensable. Defects in the intimal fusion lead to the loss of mitochondrial DNA and the mouse embryos are lethal. But its molecular mechanism is still unclear.
Rao Zihe and Yan Liming's team analyzed the short-length full-length structure of Saccharomyces cerevisiae Mgm1 protein and found that its monomer conformation is very similar to that of membrane lysin motor protein-1 (Dynamin-1), and formed a trimerization end to end. As well as reversed back-to-back dimers. Hu Junjie's group verified the discovery of the structure through biochemical experiments such as enzyme activity measurement, in vitro polymer analysis, and membrane binding. Nunnari's research team previously independently verified the structure and function of Mgm1 in yeast cells, and found that it is highly consistent with the structure analyzed in this paper. It also verified in parallel the important discovery that Mgm1 has at least two membrane binding sites.
Yeast (saccharomyce) is a eukaryotic recipient cell commonly used in gene cloning experiments. The cultivation of yeast is as convenient as the cultivation of E. coli. There are many types of yeast cloning vectors. Yeast also has a plasmid. This 2 Î¼m-long plasmid is called a 2 Î¼m plasmid and is about 6 300 bp. This plasmid exists outside the chromosome in the nucleus of the cell for at least a period of time. A 2 Î¼m plasmid and a plasmid in E. coli can be used to construct a shuttle plasmid that can shuttle between bacteria and yeast cells. Yeast cloning vectors are constructed on this basis.
During the submission of this study, a German team reported the crystal and electron microscopy structure of Chaetomium thermophilus short Mgm1, and found that the protein can be entangled into multimers on the membrane like the membrane lytic motor protein to mediate The occurrence of mitochondrial loops and membrane fusion may require membrane flexion. The "back-to-back" binding interface found in this study is conserved in C. thermophilus Mgm1, but the end-to-end interface and multi-site membrane binding have not been previously reported. Therefore, the new model proposed in this study integrates the characteristics of Mgm1 membrane binding well, and also explains in part why a motor protein member that looks like a lysing protein can in turn mediate fusion.
Rao Zihe, JodiNunnari and Hu Junjie are co-corresponding authors of the paper. Rao Zi and Yan Liming of the research team, Qi Yuanbo of the research team of Hu Junjie and Derek Ricketson of the Nunnari research team are the co-first authors of the paper. The research was supported by the National Key Research and Development Program, the National Natural Science Foundation of China, and the NIH Foundation.