Skip to content
[China Instrument Network Instrument R&D] A few days ago, the "Red Tide Stereoscopic Automatic Monitoring Technology and System Integration Application" led by the East China Sea Branch and hosted by the East China Sea Monitoring Center won the first prize of the 2016 Marine Science and Technology Award. The award ceremony was held in 2017. On the 31st of the month, it was held in Huangdao New District, Qingdao City, Shandong Province. 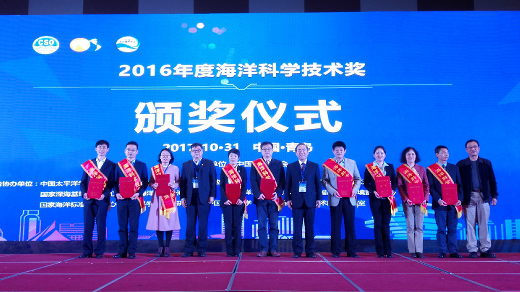 The picture shows the award ceremony. Photo source: East China Sea Environmental Monitoring Center, State Oceanic Administration.
Lin Shanqing, member of the State Oceanic Administrationâ€™s Party Group and deputy director, and Ji Hongbo, vice chairman of the Shandong Provincial Association for Science and Technology, attended the meeting and delivered speeches. Chen Lianzeng, chairman of the China Ocean Society, attended the meeting and delivered a welcome speech. The executive vice chairman and secretary general of the Chinese Ocean Society, Lei Bo, presided over the meeting. . The first accomplisher of the achievement, the deputy director of the China Polar Research Center, the former director of the East China Sea Monitoring Center Xu Ren and the project team representative Liu Linli attended the meeting and accepted the award certificate.
According to the project team's introduction, this achievement is one of the important results of the â€œ11th Five-Year Planâ€ key project of the â€œNational Key Project for the Monitoring and Early Warning System of Major Red Sun Tide Disastersâ€. The project has been established since 2007, the plan was prepared in 2009, and it has been re-launched in 2011. It has completed the project research and passed the inspection and acceptance in 2014. It has gone through 7 years. With the support of the Ministry of Science and Technology and the Shanghai Science and Technology Commission, the project team established by the East China Sea Branch and the Ocean II Branch broke through a number of technical difficulties and resolved many key issues encountered in the past monitoring of red tides. There are several significant features of the waters in the East China Sea. One is high salinity, the second is high mix of radon, and the third is the range of nutrient changes, especially in the Yangtze River Estuary. One of the project's achievements was â€œRed tide three-dimensional automatic monitoring technology and system integration applicationâ€. A 2,500-square-km demonstration area was established in the Yangtze River estuary, and a three-dimensional monitoring system of â€œstar, sea, and landâ€ was constructed to achieve high turbid water bodies. The automatic monitoring of remote sensing, automatic monitoring of ships, and monitoring results have also been incorporated into the operating system of the red tide business.
The Outline of the National Medium- and Long-Term Scientific and Technological Development Plan (2006-2020) has included three-dimensional marine monitoring technology in the forefront of key development. The three-dimensional monitoring system for marine environment will become one of the most important elements for Chinaâ€™s construction of a â€œpowerful countryâ€. The Ministry of Science and Technology has also for many years been committed to advancing the operationalization and industrialization of national independent R&D equipment and equipment. The application of scientific research results into application is the ultimate destination of research work. The main part of this achievement has been applied in the construction of 7 projects and one station of multi-energy in the East China Sea Branch. It has truly achieved the achievement of scientific research and laid a solid foundation for further industrialization.
(Original Title: â€œRed Tide Stereo Automatic Monitoring Technology and System Integration Applicationâ€ by the East China Sea Branch won the first prize of the 2016 Ocean Scientific Award)

Pvc Dispensing Machine is for multicolor pvc production, it can replace 4-6 workers, with high precision and stability, and each pieces will be same quantity and thickness, its operation is easy, programming can by computer or teachbox.  As to reduce the environmental damage, we found silicone silicone industrial, it is environment protection and no harm to human, it is the best choose.